Colors clash amidst the imbricated layers of paints. Composed of vivid brushstrokes and colors, the blocks float across the plane and carry halos in divergent shades. Brimming with these elements highly reminiscent of flowers and plants in the natural world, Yen Ye-Cheng’s paintings convey a visual impression of vines intertwined. Even the artist himself sees them in this way, because these time-consuming, hand-painted traces seem to follow the laws of nature. Free, unbridled and bursting with sheer vitality, they thrive in an untrammeled, exuberant fashion under different environmental and climatic conditions. “I channel breeze, flowers and plants to connect painting with quotidian existence. These works are neither abstract paintings nor figurative depictions of flowers and plants. Actually, they are paintings concerning flowers and plants,” the artist said so when describing his works. 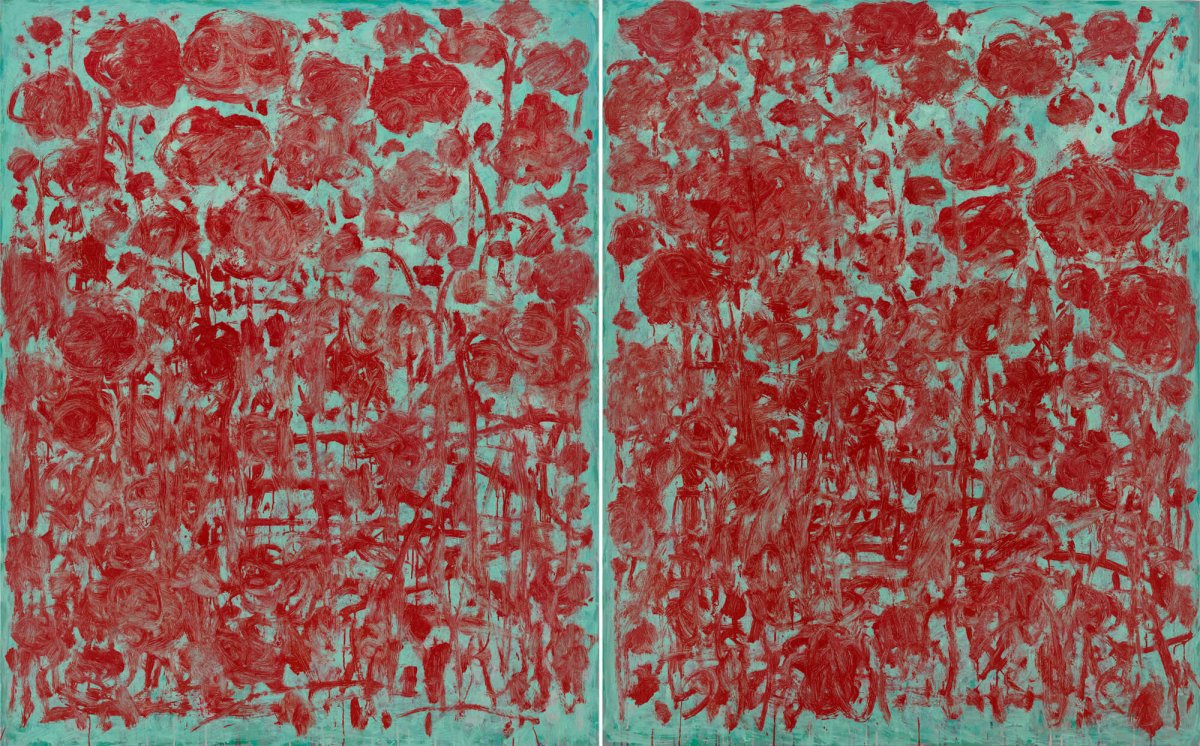 Born in Taichung, Taiwan in 1955, Yen made it his goal to be an artist at an early age. Therefore, he chose to enroll in the western painting group, fine arts division, National Taiwan Academy of Arts rather than in any teachers college with a fine arts department. After his graduation in 1978, he didn’t become a dedicated artist directly but took a job in interior design due to the vicissitudes of life. In 1986, Yen began to work as an art teacher at a vocational high school in central Taiwan, and it was around the time that he became consciously aware of his incomplete understanding of art. “If memory serves me, it was out of the will of ascertaining why the oeuvres by Matisse, Cézanne, Picasso, or Pollock were widely recognized as unparalleled that I got down to extensive reading about modern and postmodern art,” Yen explained. According to the artist, the extensive reading and deep contemplation in that period enabled him to “gradually comprehend” the ways of expression of modern and contemporary art. As one can well imagine, it was a marathon journey of exploration that involved the expansion of his horizons vis-à-vis the rediscovery of his inner self and the establishment of his cognitive system. It was by no means an “epiphany-like” sudden revelation but an incremental clarification out of chaos. It can be argued that the artist started to evolve his inimitable personal style from such checkered past, based on which we got a better grasp as to why temporality is indispensable in his creative practice and how elusive time is reified into kaleidoscopic visual expression and mesmerizing inner space by virtue of the painterly, imbricated thin layers of paints on the compositions.

Yen left for the United States after having a basic understanding of western modern and contemporary art. He enrolled at the State University of New York in 1991 and earned his MFA in 1994. Back to Taiwan, he taught fine arts at colleges and got faculty tenure in the Department of Fine Arts, National Taiwan University of Arts in 2003. According to his statement, it was also at the time that he became a dedicated artist. He treats the year 2003 as the departure point of his artistic career for two reasons. The first is that his favorable living conditions have allowed him to devote himself to artistic creation. The second is that what he learned from the years of reading and reflection as well as from his studies in the United States have lent him some insight as to how his paintings should be presented in terms of form and content.

At that time, Yen premised his paintings on displaying the qualities and aesthetics characteristic of the Orient in western forms. It was undoubtedly an overt manifestation of the mainstream of Taiwanese modern art. The artist’s signature style in that period thus featured an abstract structure with a touch of orientalism, which was perfectly exemplified by his triptych oil painting [Illustration of Nature-3](2003). This work’s composition is interlaced by massive blanks and scattered blocks of black brushstrokes. Such a visual structure is strongly reminiscent of the wrinkle method or landscapes specific to traditional Chinese ink-wash paintings. To be honest, it was a result of the artist’s deliberate manipulation. According to Yen’s statement, the form of this work owed its inspiration to that of western altarpieces. In terms of its composition, however, the artist intentionally abandoned western laws of perspective in favor of oriental principles that accentuate aesthetic deployment of blanks and brushstrokes, insofar as to create an enchanting spiritual world.

Following the "Illustration of Nature" series, Yen delved deeper into the relations between his life and art, and [Flower in Breeze 1209 – the Silk Road](2012) was his iconic work created in this phase. Taking the consistent form of a triptych, this work was nonetheless poles apart from that he created a decade ago in terms of brushstroke and composition. More specific, “nature” or “flowers and plants” remained the key elements in Yen’s paintings, yet the latter’s subjects had taken an allegorical and symbolic turn as the artist’s creative awareness was gradually heightened. To put it another way, his act of “painting” transcended the rigid confines of “what to paint” and ergo acquired a holistic meaning like never before. In this sense, nature, as well as flowers and plants, became little more than the visual clues to the contents of his paintings, since the latter were capable of independent existence. Just as the artist claimed, “what I paint is not so much flowers and plants as the ‘painting’ per se.”

Yen’s physiognomy mirrors his mind. Instead of bending to circumstances, his mind transforms them. As far as Yen is concerned, artistic creation has become part of his quotidian existence. Besides, since that the artist has diligently practiced his Chinese zither in recent years, his conduct of painting bears more than a passing resemblance to those tablatures without regular rhythmic notations. A melody may have different manifestations even if it is played by the same player. By the same token, each of Yen’s painting practice is brand new for him, which has an unpredictable nature even though he paints with the same pigments on the same canvas. Accordingly, Yen’s 2019 solo exhibition appears to be less an interim presentation than a node in his daily life if we admire his paintings in the way mentioned above. Seemingly picked up at random, the alluring scenery beckons, inviting a closer, sensitive reading of the artist’s subtle, indeterminate frame of mind. The exhibition title “DaoDao Ling” is derived from the name of a tune in Yuanqu, a genre of classical Chinese poetry. Fixed melodic formula notwithstanding, one can compose the lyrics without restriction, hence literary imagination that knows no bounds.

I felt an infectious aura of poise and relaxation emanating from Yen’s recent works. Every casual brushstroke and layer of paint at whim bear his self-awareness and conscious options. Nevertheless, it’s not so much an act of unrestrained boldness as a thoughtful response made after innumerable modifications. Via the dots, lines and planes that underpin the compositions, the artist has persisted in exploring the possibilities for maintaining critical distance from his paintings, while the latter stand as powerful testimony to such a lonesome, drawn-out struggle. Yen’s oeuvre is so thought-provoking in a way that, amidst the blurred images beyond flowers, you would encounter captivating incarnations of the infinite universe rather than a microcosm of magical nature or plants that you originally expected to see. 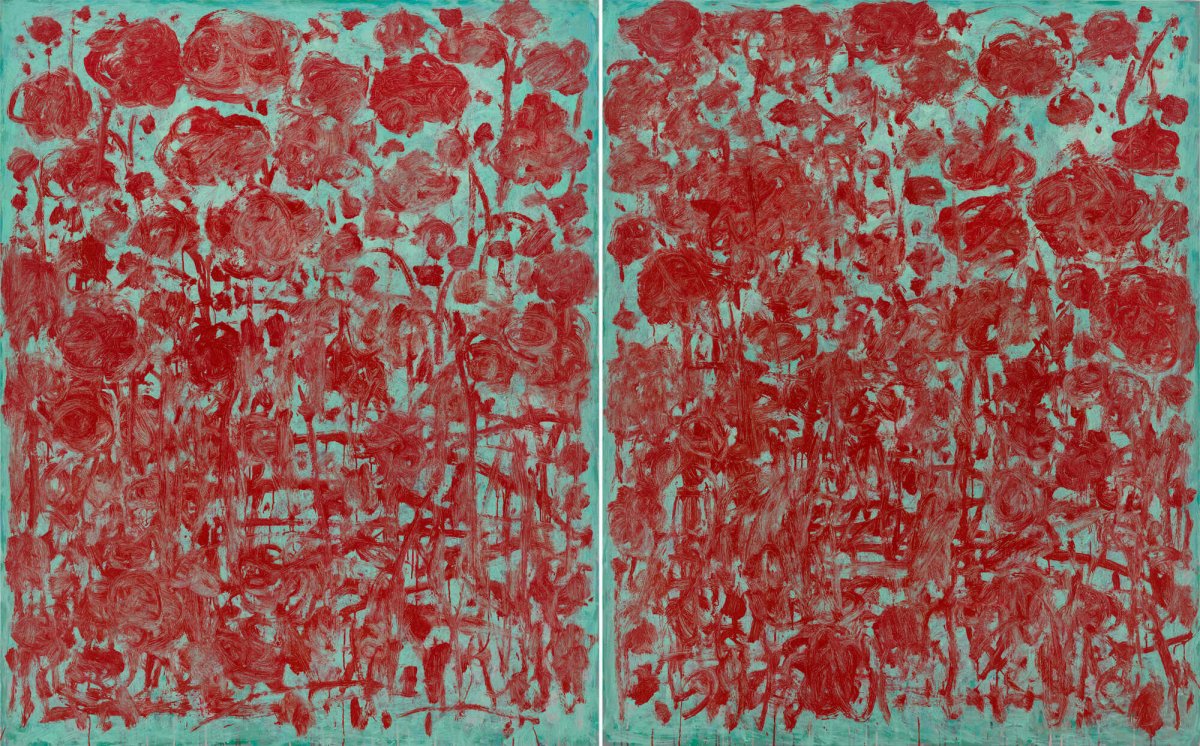 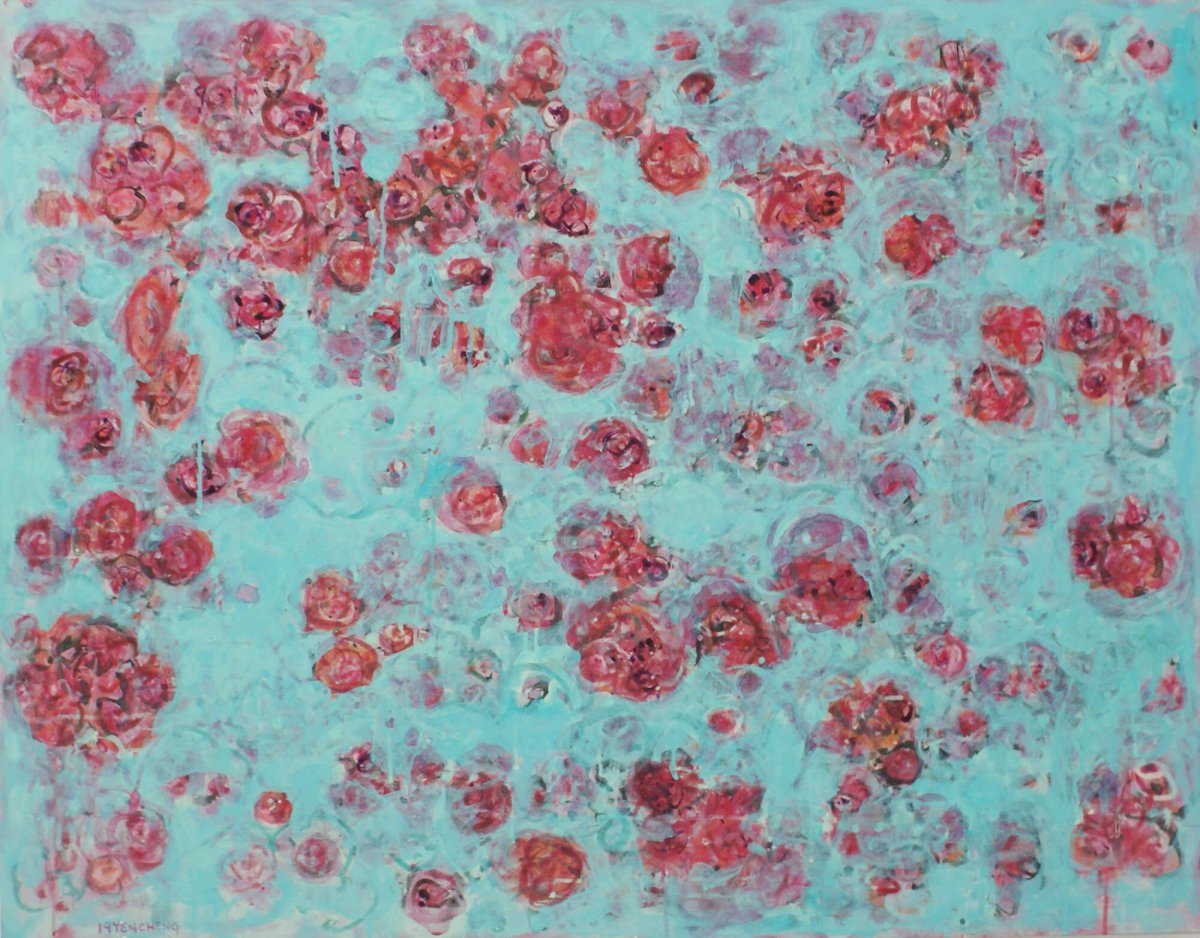 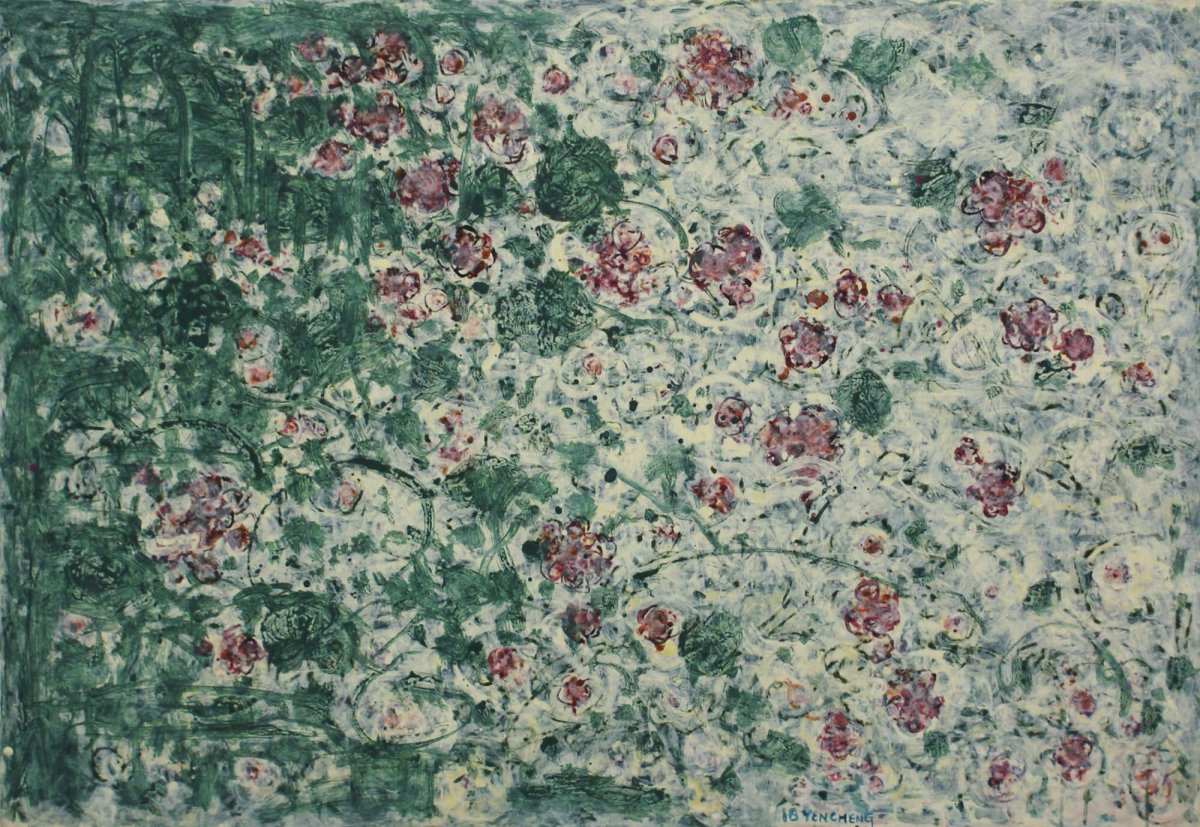 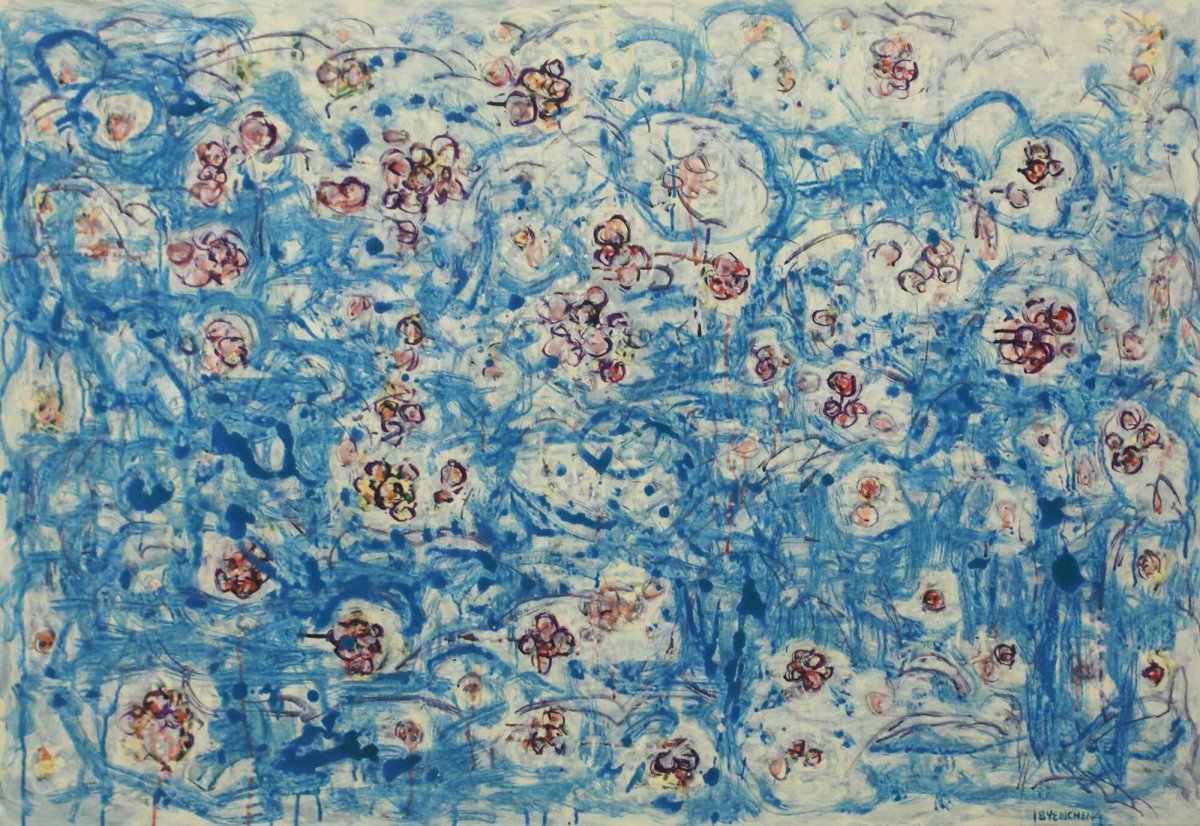 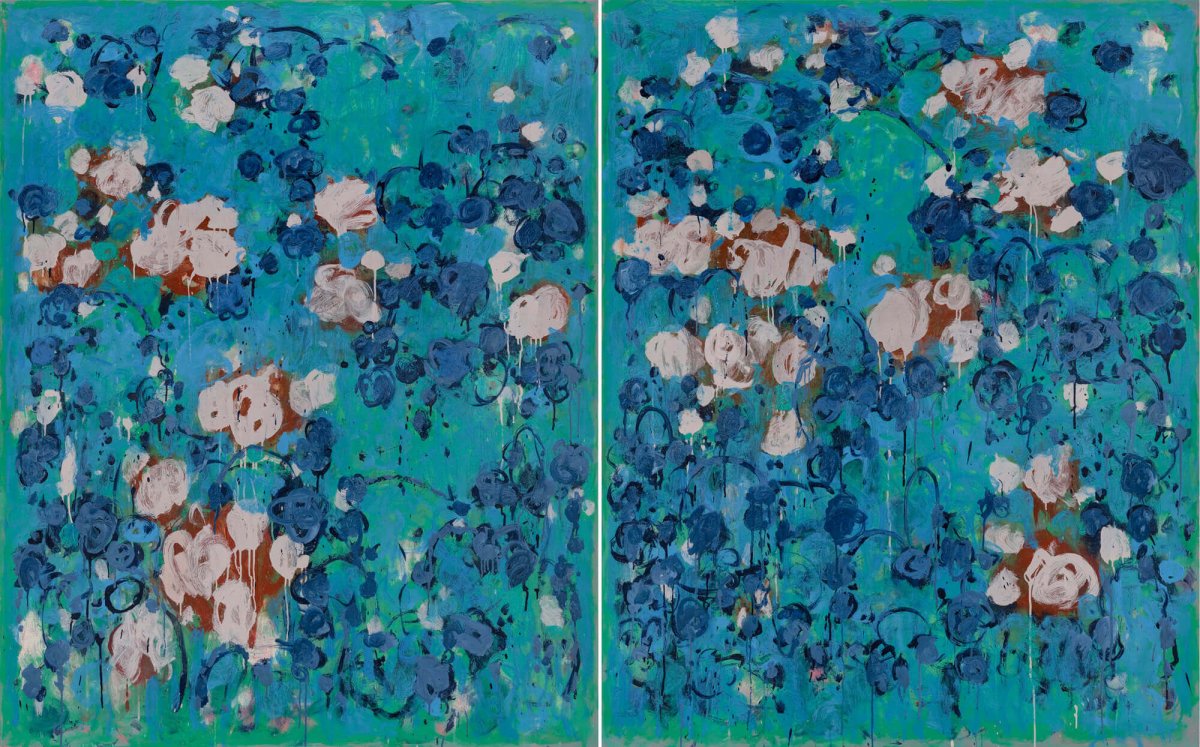 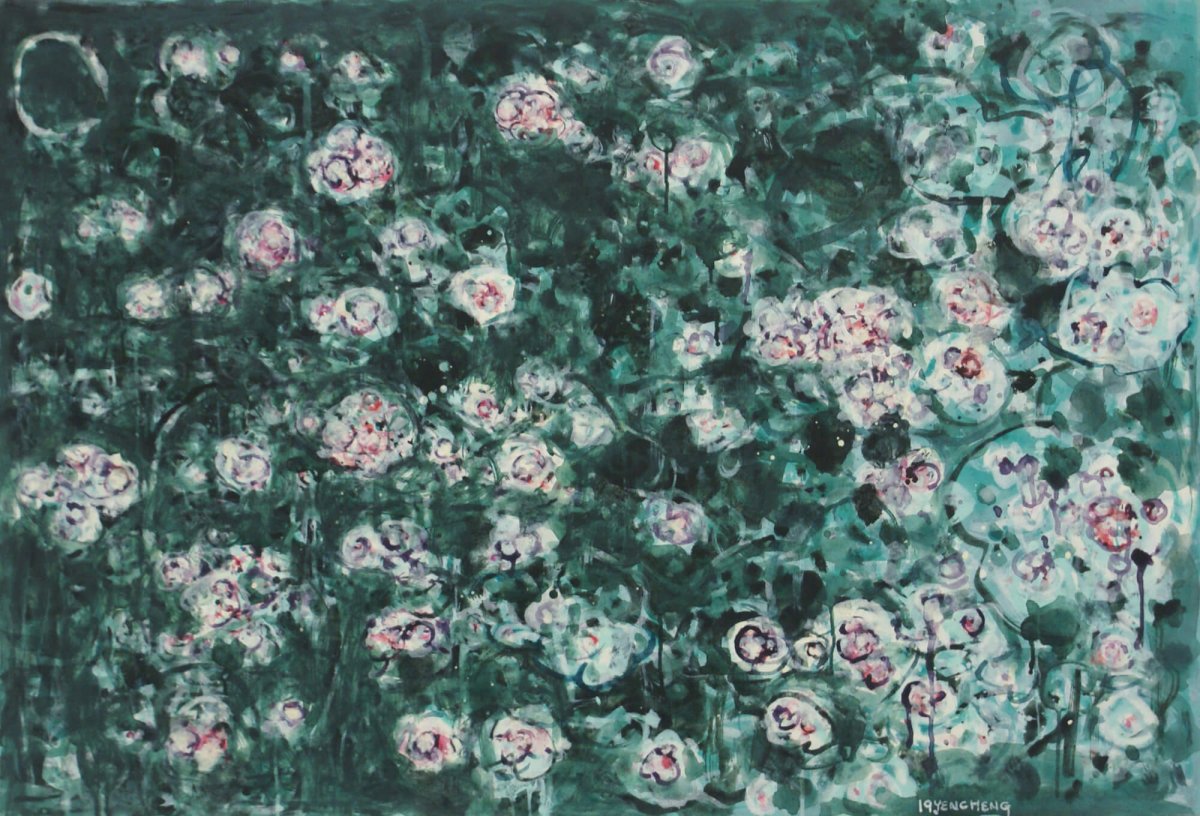 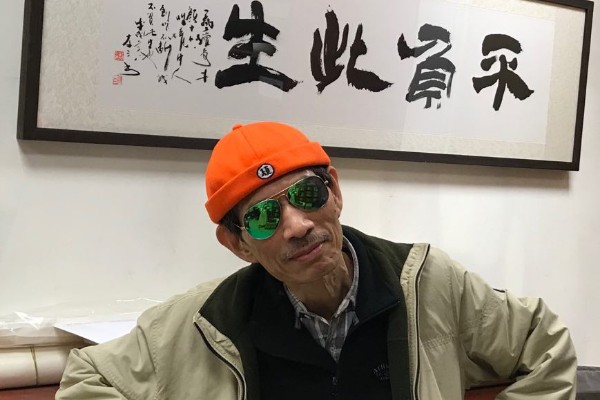