Song of Emptiness – Being in the emptiness, close to the far
Wu Ying-Hai

A piece of blank paper is sometimes hard to confront.
But it can be very enlightening.
It contains nothing and everything.
Formally empty notwithstanding, it’s saturated with intangible connotations.
This piece of paper teaches us to admire blank, tranquility, emptiness or void.

Void, which leaves us a feeling of loneliness.
It is why we believe that something must be done so that the void can be filled…
As some people argue, antitheses or struggles are necessary commodities if we’re going to create art, and our emotional undulations have many resonances for the viewers.
However, the truth is perhaps just the opposite.

Reasons are not the prerequisite for artistic creation.
They’re procrastinating and ergo non-present.
The present is a concrete manifestation of directness and purity. It’s saturated and meanwhile empty.

We take actions in non-action, and let things take their own course in actions.
We require exercise, yet we can live without it.
We have to discard something, while we have nothing to discard.
We need treatment, and in the meantime we don’t need it.
We can hold expectations, and also expect for nothing.

Song of Emptiness – Being in the emptiness, close to the far
Abugy

Meeting our innermost being … at infinity …

There’re many ways to seek our innermost being — outside-in or inside-out! Reduction and accretion are equally effective in result though different in approach.

Our innermost being will be sublimated when the process of internalization, reduction in particular, is carried to extremes. Tension builds around the mystery of artistic spirit, capable of visually purifying the mass which can be known intuitively.

Wu Ying-Hai is composed and unswerving in terms of his conduct, oeuvre and philosophy of life. The exhibition titled Song of Emptiness – Being in the emptiness, close to the far is exactly an incarnation of Wu’s écriture d’art, in which the purity and emptiness of his unparalleled, internalized spirit of art find expression.

I’ve maintained a lasting friendship as insipid as water with Wu for two decades, knowing well that he is an artist whose oeuvre features his pure intuition and spirit of life. Throughout his career he leads a simple life with very few solo exhibitions, yet his oeuvre radiates magical auras of simplicity, purity and profound refinedness. Here, simplicity refers to his deeds of carpe diem, and purity to his principled and incorruptible mind. The profound refinedness implies not only the visible tension mounting around his oeuvre but also the visualization of his mental images. His innermost being demonstrates inherent empathy and power of comprehension. From personal character to practice, Wu sustains a consistent state of life by continuously contemplating the oneness of everything. Believing that persistence is the key to success, Wu can be rated as a knight-errant with creative spirit, which is few and far between in the contemporary art world. The visual power of Wu’s écriture d’art manifests itself in Song of Emptiness, a solo exhibition that transmutes intangibility (i.e. the permeable existence) into visual images. Through this exhibition, Wu vividly conveys the essence of his innermost being, since he truly understands what counts as the divine wisdom!

Wu’s écriture d’art is reductive and restrained without compromising its saturation, while his artistic vocabulary is as extroverted as concisely vigorous. The composition’s formal emptiness is used as a perfect foil for the robustness and purity of his brushstrokes, which not only evokes the viewers’ memories of their innermost being as alien as intimate to themselves, but also helps them grasp the truth that knowingly facing such oblivion is the best explanation and interpretation of it! “No obstruction lies between us and the Buddhahood, and a consistent thought transcends the rigid confines of time,” a famous quote from Li Zhangzhe in the Tang Dynasty after he systematically studied the Avataṃsaka Sūtra, can be taken to describe Wu’s approach to the field of life. In regard to the space-time field, the artist gradually blends himself into synchronic transcendence and penetrable existence that know no bounds. It proves that Wu is on a spiritual journey across the basic nature of various periods, expecting to meet his innermost being … at infinity … which is embodied in the substance of his écriture d’art. 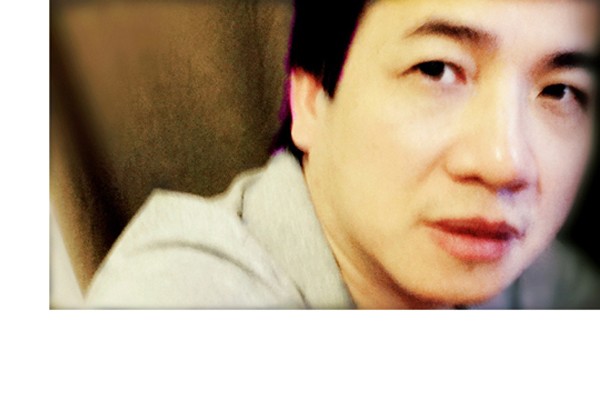